Background
Around the world, communities are investing billions to maintain and expand infrastructure. Despite all their efforts there is always more to do, and resources are insufficient to address the problem nearly everywhere.

The Interstate Highway system, the seeds of which were first planted in 1944 by General Dwight D. Eisenhower, later blossomed during his presidency with the passage of the 1956 Federal Highway Act. Although the system cost $129 billion dollars and required 53 years to complete, it is estimated that every $1 spent to construct the 42,796-mile interstate has resulted in an estimated $6 of economic growth – a 500% rate of return.

Without an interstate highway system, life in America today would be very different. Populations of inner cities would be much more dense; intercity travel would occur less often and be more cumbersome; freight charges would be higher and so, too, would the price of consumer goods.

According to the 2012 U.S. Census Bureau, 80.7% of the U.S. population live in cities with half of the population living in only nine states, New York, Georgia, California, Michigan, Ohio, Illinois, Pennsylvania, Florida and Texas. As our nation becomes increasingly urbanized, the interstate highway system may play an even greater role at the regional level as large metropolises compete for workforce talent to spur investment and drive innovation. I-14 will help unite trading partners and employment centers on a regional, statewide and national level.

According to a 2017 Urban Land Institute survey of public sector and private sector leaders, the quality of infrastructure systems, including transportation, utilities, and telecommunications, is the most important factor influencing real estate investment and development decisions in cities around the world. Unfortunately, the March 2017 American Society of Civil Engineers’ (ASCE) quadrennial infrastructure report card gave US roads a “D” rating, citing little to no change since 2013.

The designation of a 25-mile segment of US 190 between Copperas Cove and Belton as Interstate 14 (I-14) was a significant event that may help improve that rating. This designation is more than a name change; it signifies that infrastructure improvements have met interstate highway standards. These standards will result in enhanced motorist safety and mobility. They will also allow for improved transportation, communication, education, research and healthcare. In addition, improved access to I-35 will improve military mobility, trade, technology transfer, and career opportunities for area residents. 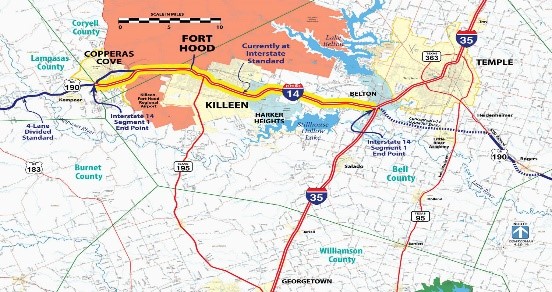 According to Marc Williams, TxDOT Deputy Executive Director, “the I-14 corridor will improve access and connection to military installations along the US 190 corridor, as well as provide a critical artery for commerce, that ultimately will stretch from West Texas to the Texas-Louisiana border.”

Once completed, Interstate 14 will extend approximately 1,566 miles from El Paso, TX to Augusta, GA, connecting the Killeen-Temple-Fort Hood Metropolitan-Statistical Area (MSA) with hundreds of communities in between. The regional 14 Forward campaign led by the Greater Killeen Chamber of Commerce (GKCC) is currently championing the Interstate designation of highway segments in communities along this route.

The premise behind the highway improvements is that one must ﬁrst have access to markets before one can beneﬁt from them. Unifying and strengthening local assets will allow communities to penetrate new markets. Transportation access stimulates investment, and thus economic activity, by increasing the rates of return to private capital. Planners responsible for deciding where to open new locations base their decision largely on the density and expected performance of geographic areas. New manufacturing locations are also systematically influenced by access to highway infrastructure, particularly at the municipal level.

Roadways also play a significant role in determining where people live. A study by Carlino and Mills in the 1980’s demonstrated that interstate highways significantly influenced metropolitan growth in the 1970’s, and that people and jobs moved to counties with more intense interstate highway networks. Projected employment patterns in the City of Killeen 2015 Thoroughfare Plan indicate that by 2040 employment density will be highest along the I-14 corridor.

As infrastructure is a primary driver of real estate investment, cooperation between developers and public leaders is key to delivering additional infrastructure improvements in the future. There is no question that today’s highway system requires renewed investment. Many portions of the system are at capacity, causing delays, air pollution and dampening economic activity. The interstate highways were built to accommodate 20 years of traffic growth but by 1985, half of the system had reached its design life. By 1995, 90% of the system was 20 years or older.  Consequently, the current interstate highway system is incapable of handing the 270 million vehicles on U.S. roads each year.

Economic Impact
County-level data is often used to analyze economic performance among counties to determine whether growth is influenced by the presence or absence of an interstate highway. The link between interstate highways and economic development has been the subject of several studies and that included variables such as sales tax collections, origin of vehicle, gross receipts and labor mobility. Repeatedly, these studies have found that the interstate highway system improves labor mobility, thereby changing the economic performance of counties based upon employment patterns.

Let’s examine the 588 miles along I-35 between Laredo and Gainesville to help demonstrate I-14’s economic potential. I-35 is regarded as one of the state’s most critical arteries both socially and economically. According to TxDOT’s I-35 Statewide Corridor Plan, the 21 counties along I-35 encompass almost 40% of the Texas population and account for more than 40% of all Texas jobs.  Population and employment along the I-35 corridor is expected to increase by 82% and 77%, respectively, by 2040. Although I-35 contains only 18% of the total lane miles of the Texas interstate system, it will account for more than 30% of total vehicle miles traveled on the Texas interstate system by 2040. If I-14 can achieve even a fraction of this impact, it will have been well worth the investment.

Forging New Connections
The 14 Forward initiative was formed in part to encourage the continued momentum of Interstate 14 development and take advantage of the many benefits the roadway will bring to our community. I-14 will strategically connect companies, talent and support industries that typically revolve around large anchor institutions – mainly universities, colleges, medical centers, military installations and other knowledge-based institutions. It will also have the added benefit of improving national defense by connecting military instillations across the state.

Anchor institutions, especially universities, are catalysts for knowledge-based and talent-driven urban economies as they are magnets for faculty, researchers and students who are key to building an innovation economy. Texas A&M University Central Texas and Central Texas College will play a key role in shaping the future of our region, so it is imperative we include them in future economic development efforts. 14 Forward recognizes that education and medical institutions cannot drive innovation and development on their own, which is why the program also calls for the inclusion of entrepreneurs, startups, private enterprise, high-tech companies, and talent.

An additional benefit of interstate designation is increased efficiency through new transport technologies, cost reductions, and changes in distribution patterns. Historically, highway investment decisions have been based on the benefits of reduced travel time and accident rates, which has resulted in today’s interstates being the safest aspect of the nation's highway system. Today, we recognize the broader community benefits that interstate travel has on living standards by reducing the costs of production, supporting productivity and output growth, and promoting competitiveness.

Investors behind 14 Forward understand that a well-functioning transportation system not only improves safety, but allows businesses to hold less inventory, use just-in-time inventory procedures, and enjoy greater locational choice. While previous infrastructure decisions focused primarily on mobility and safety, 14 Forward promotes the economic benefits that accrue to industry with improved highways access, demonstrating that such connectivity can have a positive economic impact for both the private and public sector.

Across the state there is growing interest in partnerships that integrate design, construction and operation of a public facility, such as a highway, to a private operator. Similarly, the I-14 segment between Belton to Copperas Cove was initiated through the actions of private business. The investment group aptly named 14 Forward has contributed $1.8 million of equity through the 14 Forward Foundation for marketing and business recruitment of industry to anchor the corridor.

According to 14 Forward Board Chair and businessman Bill Kleiwer, “Killeen has long enjoyed its central location within the marketplace but lacked the needed accessibility to be economically competitive; we’re confident that 14 Forward will change that.”

Harvard Economist and author Michael E. Porter’s 1985 book Competitive Advantage first introduced the concept of looking at companies as a series of activities that link into what he called a “value chain.” 14 Forward applies the same principal to connect and add value by linking the major assets within the Killeen-Temple-Fort Hood MSA to those in other regions.

Economic Development Magnets
While colleges and universities are notable for their ability to attract research, and industry; military bases have become equally adept at developing relationships with private enterprise. It is commonplace for military installations to be colocated in population centers near colleges and universities, or vice versa. Other factors, such as labor force pools, plentiful land and transportation systems make military bases strong business allies and are a critical contributor to 14 Forward.

According to business relocation specialist Joseph D. Cavolick, “the availability of high-quality skilled employees is one of the key drivers that makes development around military bases so attractive”.

Keith Sledd, Executive Director Heart of Texas Defense Alliance, notes “not only does Fort Hood provide a multi-billion-dollar economic impact to the area, it also provides a potential workforce for business and industry recruitment. There are 1,000 plus military personnel departing Fort Hood each month seeking to enter the civilian labor force. Their mastery of technology, teamwork, and adaptability speaks not only to the strength of our Armed Forces but to the caliber and potential of that workforce if retained in the Central Texas region.” This potential workforce is an incentive for industries and corporations to seek a long desired and more collaborative relationship with Fort Hood. The 14 Forward initiative is a vehicle under which that can happen.

Military spouses provide another potential workforce to incentivize industry. Mr. Cavolick states, “a major source of workers are the spouses of service personnel. This is an excellent built-in labor force. Many of them have young children and are looking for work opportunities near the base." Another major employment segment are the retired military personnel. "These people often want to remain close to the base and also possess the necessary security clearances," he says. "It makes for an ideal transition into the private sector".

The benefits of an interstate highway are numerous, whether for commerce, national security, commuter safety, talent development or quality of life. Interstate 14 is sure to influence the future of our region, the state and the nation. To reap maximum benefit of the interstate locally, our community must support its continued expansion nationally.