The 18th century economist Adam Smith identified three factors of production as the foundation of economic development: land, labor, and capital. For its time, it was widely believed that these three inputs determined a product or services economic profit. However, we now recognize that physical factors alone no longer determine profitability in today’s economy, where technology, innovation, knowledge, and human capital play a much greater role.

Time has also taught us that universities provide an untapped competitive advantage in the knowledge economy. The City of Killeen is located within a 22-miles of four institutions of higher learning producing 7,500 graduates annually. Collectively, these institutions have the potential to fuel local innovation of emerging sectors such as cybersecurity, autonomous systems, cloud computing and artificial intelligence.

Killeen has struggled mightily to generate, attract, and retain the enterprising talent that is essential to economic success.  Fortunately, technology and innovation may hold the key to its future. From new inventions like software, robotics, and biotechnology to improvements in manufacturing systems and processes, technology makes economies more efficient and productive.

Today, one in every twelve workers in the United States is involved in a startup company. Seven of the top 10 largest companies in the world are in technology. As early as the 1940’s economist Joseph Schumpeter wrote how innovation and entrepreneurship can set in motion the “creative destruction” to drive economies. Some 20% of Fortune 500 companies were founded in just the last thirty years, including Google, Microsoft, Apple, and Amazon.

This paradigm shift has only intensified as COVID-19 challenges our perceptions of utilizing technology to create jobs, lift wages, address inequality, and foster long-term, sustainable prosperity. However, time has also shown us that most net job creation comes from new young companies as they enter the economy and are brought to scale. In addition to creating most of the new jobs, technology companies have impressive job multipliers. Estimates suggest that for every high-technology job, five other jobs are created in the economy. Further proof of Killeen’s need to embrace this new paradigm is the U.S. Army’s embrace of technology and innovation to improve Soldier dominance on the battlefield.

According to author Richard Florida, the Creative Class now makes up 40% or more of the workforce in 14 nations. Singapore has the highest creative ranking, followed by the Netherlands, Switzerland, Australia, Sweden, Belgium, Finland, Norway, and Germany. Canada ranks 12th, with 40.84% and the United States ranks 27th with 34.99%.

Unfortunately, economic crises often become extinction events for entrepreneurs. The COVID-19 crisis has been no exception. Many Austin startups, in what Newsweek named the 2019 startup capital of North America, are perilously close to closing. The downstream effects are that 60% of startups have laid off employees or reduced salaries. It is estimated that four out of every 10 startups have less than three months of operating reserves.

In this time of crisis, all policymakers need to be fully apprised of the meaningful contributions startups provide to the local economy. Accordingly, Killeen should adopt local policies and programs to reach out to startup companies.

Austin is one of the fastest growing cities in the U.S., with a population of over a million.  However, it has also been unprepared for its pace of growth that has been exacerbated by the world-wide pandemic. The pandemic has accelerated business migration to Austin from New York  and California for its rents, workforce, restaurants, and year-round climate.

Unfortunately, the unintended consequence of this growth is that Austin’s place as a tech hub has pushed rents beyond the reach of many startup companies. Consequently, startups are facing a double challenge with a drop in consumer demand amid a pandemic at the same time Venture Capital is dropping, leading to a crunch for startup capital.

Class A space in Austin’s three submarkets, Central Business District, Southwest, and Northwest, start from $22/sf. to $40/sf. The City of Austin has stepped in to help businesses, but relief programs typically have strict eligibility rules and emphasize companies with revenue, profitability, and collateral. These rules leave a lot of startups ineligible for funding which may lead to closures or a mass exodus.

Up to this point, Austin’s technological pursuits have been focused locally, but they are now looking to create globally leading companies.  These factors inherently increase competition for available space and create affordability issues for many startups.

In 2019, Venture Capital in Austin totaled $1.84 billion, up 19.5% from the previous year.  Angel investors made up 43% of the Austin’s venture rounds in 2019 down from 56% in 2015.  This shift may indicate that Austin’s economy is moving its focus away from startups to facilitating more mature companies.

The truth of the matter is that every crisis creates opportunities, and this pandemic is no different. More than half of Fortune 500 companies started during an economic contraction and more than 50 unicorns, private startups with a value of over $1 billion, were created in the Great Recession alone. The list of companies funded during the Great Recession include Facebook, LinkedIn, Palantir, and Dropbox. 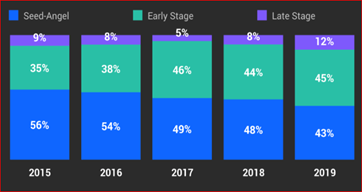 However, where Killeen’s higher education institutions to combine resources, they might create a startup culture that could spread across the region. Different ecosystems would emerge and gain relevance that could impact Killeen, Harker Heights, Belton, and Temple in a meaningful way.  Startups provide competition in virtually every industry with increasing returns to scale due to network effects. Without startups, technology, finance, healthcare, and other fields become stagnant. When startups scale and become important industry players, they add prestige and value to the ecosystem in which they operate.